In Love With Alo Yoga Pants 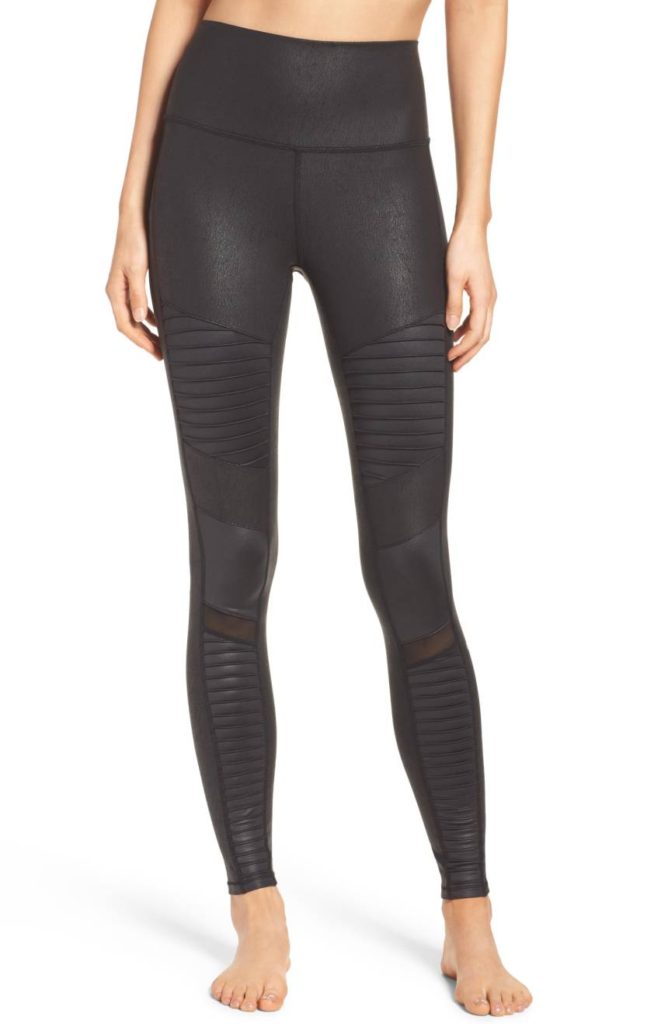 For years now, I’ve been a die hard devotee of Lululemon pants. They wore like iron. They fit well. They were plain but ready for whatever activity I cared to throw at them.

Now, naturally, all my Lululemons are starting to lose their girlish laughter all at once. They’re a bit stretched out, a tad frayed. I don’t really know if the butt is see through yet, but only because I lack the guts necessary to ask the poor person who spins directly behind me.

So when I tried on new Lululemons, I thought they’d be the same, but they weren’t. They seemed too thick, a bit too confining. I bought a pair of high waisted capri length ones, and felt like I was wearing a corset. Some may like this sensation, but I don’t; my theory is that whatever is displaced by that corset grip has to migrate to somewhere else, so it’s just fat displacement rather than camouflage. Plus, they make my butt look really, really big.

My disappointment in Lululemon is another brand’s gain. On a trip to Nordstrom, armed with a gift care, I tried my first pair of Alo Yoga pants. I fell in love.

The first pair I purchased were the Moto pair. They are a fortune. I only purchased them because I had a gift card. Alo’s web site describes them as “street ready,” as they have seaming and texture on them mimicking motocross gear. Yeah, they look cool. They’re very stretchy and comfy. But they also look weird, like Alien weird. Seriously, if H.R. Giger had designed yoga pants, he would have created the Moto. The truly odd thing about them is that the pattern leaves marks behind on your skin, so you’re still all moto’d out post workout. This is disconcerting and inconvenient if you’d like to wear a skirt later. I got them in black. They are currently on sale on the site in forest green, but I think that would make one look a bit too froggy.

I also bought the Continuity capri, which has mesh cut outs that circle around the upper and lower legs. They’re extremely comfortable and have a lot of give. These are great for yoga, barre classes and spinning, but I wouldn’t wear them for aerial. The mesh inserts seem a bit fragile for the stress a trapeze places on knees and shins. Cut outs and fancy seaming just means chafing in terrible places with equally awful results.

The best Alo pants by far are the Dash. These are high waisted and plain, except for a tiny seam running up the back legs, which evoke seamed stockings. The material is particularly light and stretchy, which makes them the most comfortable yoga pants I’ve ever worn. Did I mention they’re high waisted? Somehow, the slight compression works, holding stuff in without forcing it, toothpaste tube like, out the top of the pants. I just love them. No, they’re not currently on sale.

If you’re into Contortion training or dance, the Goddess legging is on sale now. These are extra long and wrap around your heels, dancer style, plus the two tone design looks like you’re wearing leg warmers. I think I’m too short for these to be flattering, but if you’re a taller drink of water or have very thin legs, they’re a good purchase.

One style I absolutely would never recommend is the Ripped Warrior. That means they already have rips in them, as if you’re a warrior who lost the fight. While I’m willing to wear ripped clothing in other capacities, during exercise I like my fabric whole, thank you very much. After all, in circus there’s nothing worse than hearing that ripping sound and wondering if you’ll have to be cut out of your pants while hanging ten feet in the air. Rips are to be avoided, not pre paid for.

So now I’m considerably poorer but flush with yoga pants. It’s a good thing that at age 49 I don’t care about the latest Fall fashions and never go to fancy events that require evening wear. Buying good exercise gear seems like a more worthwhile investment anyway.