Bouncing Back to Fitness After a Breast Cancer Diagnosis, Part 1 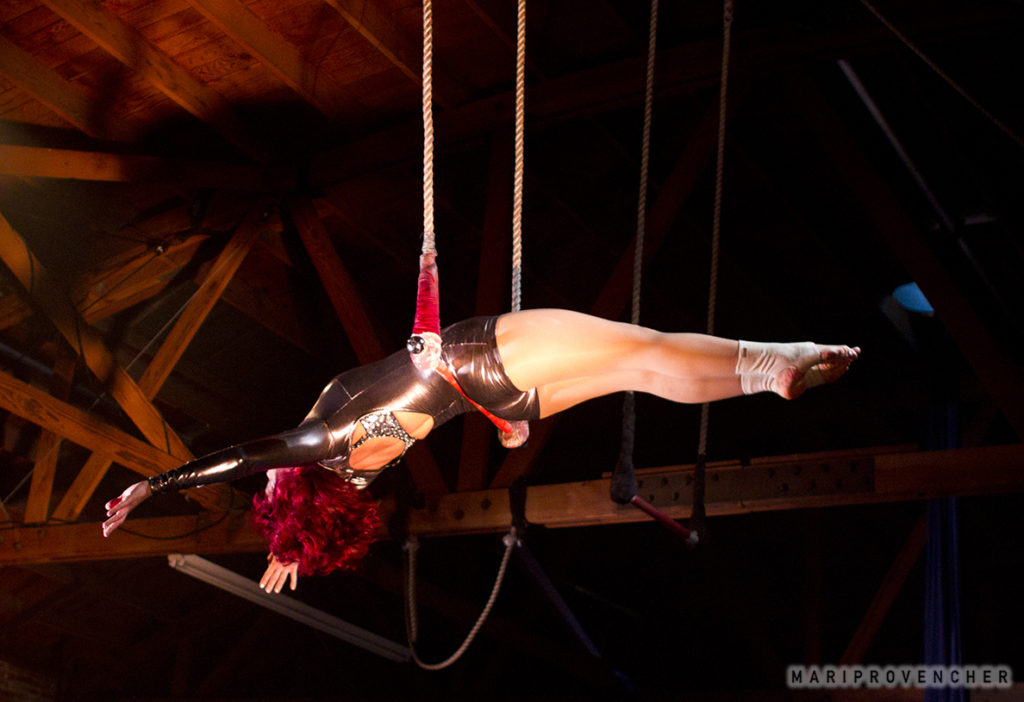 Here’s Lisa, just hanging out in a perfect back balance.

This is the first in a three part series about Lisa’s journey as an extremely fit woman over 40, diagnosed with breast cancer.

My name’s Lisa and I’m about 3 months out from a bilateral mastectomy with lymph node removal on my left side. I’m a single mom, I have a demanding career in animation production, I’m an amateur aerialist, and I was diagnosed with breast cancer at 47.

My cancer was found during a routine screening. Or rather, a routine screening set off a series of events that led to diagnosis. I have a family history of breast cancer (although none of us have the BRCA 1 or 2 mutation), but it’s something that hit my family members later in life. So I felt fairly confident that my doctors were only doing due diligence when they ordered increasingly invasive tests. I felt so confident that the results of my biopsy were going to reveal that this was just another scare that I took the call from the nurse while striding into work, rather than waiting until I was in my office (where I could close my door prior to having a complete meltdown). But there you have it. I had cancer.

After the initial shock wore off, I found myself switching into problem-solving mode. What tests did I need to take? What doctors did I need to consult? What appointments had to be made? What information did I need in order to decide on a course of action? Part of the decision-making process for me also involved a careful consideration of what I needed to do in order to fight the disease while getting back to my level of physical activity as soon as possible. It was also crucial to me that I be able to maintain a level of fitness during treatment…even if that meant redefining my daily workout as a walk in my (albeit hilly) neighborhood, instead of hours spent at Cirque School or runningOne thing I learned is that there there’s no real way to plan for outcomes after surgery. Whatever path a breast cancer patient takes, surgery reveals more than tests alone. As much as I hoped I wouldn’t have to have all of my lymph nodes removed, leaving me with a severely diminished range of motion and at risk for lymphedema, if my doctor found cancer in the sentinel nodes, she was going to have to take them all out. Survival comes first. And there’s no way to plan for it other than to have as much information about various outcomes as possible.

With this in mind, I read as much about physical rehabilitation as possible, but most of the literature I found was geared towards people who weren’t particularly active going into their treatment. I read a few academic papers about post-surgery recovery and Pilates, but other than that I wasn’t able to find much information about returning to a high level of physical activity after surgery. According to the American Cancer Society, in 2016 there will be an estimated 246,660 new cases of invasive breast cancer and 61,000 new cases of carcinoma in situ in women. Given that an estimated 2.8 million women in the US have a history of breast cancer, the goals of breast cancer patients and survivors has to expand to include women finding ways to thrive after diagnosis. At the risk of sounding melodramatic, a cancer diagnosis is not always as dire as it used to be – and for me at least, a crucial part of recovery was mapping out the route back to my pre-cancer self.

Thankfully, I know a few phenomenal athletes who’ve faced this disease. A former co-worker who was a dancer told me how she found her way back to ballet after a particularly rough course of treatment. My cousin, a ranked amateur tennis player who worked her way back after a lumpectomy and radiation, also gave me hope. To be honest, I didn’t share my diagnosis on all my social media outlets. Partly I wanted to control the chatter coming my way and keep it to people who would be supportive and positive, and partly because I didn’t want my diagnosis to become my defining characteristic. But the people I did tell were an incredible source of comfort and information. I reconnected with a friend and Pilates instructor who had successfully rehabbed professional aerialists who’d undergone mastectomies. Her words of encouragement meant more to me than a thousand academic papers. Knowing that I had someone in my corner with experience helping athletes rebuild after the trauma of surgery was the one bit of good news I needed deal with my reluctant membership into a really shitty club.

Reflecting on my ongoing struggle to get back to some semblance of normality (or at least be able to hang out on a trapeze again), I decided to look at this process in three different stages:

The hardest part of this was the realization that I would be unable to study the static trapeze for a long period of time, no matter what I did. Trapeze lessons were far more than just a fitness routine. Cirque School was my spiritual home. It was my social life, my creative outlet, my moving meditation and a huge part of my identity.

I tried to maintain my level of activity through this first phase, with a few modifications. Sometimes I just wanted to spend time in a darkened yoga room instead of taking spin or going for a run – and I listened to my body when my brain needed quiet.

I also found myself stepping back from 2-3 weekly trapeze classes to focus on flexibility instead. I think I did that not only to prep myself for the extended absence but also because the prospect of losing this part of my life made me incredibly sad, and crying on the trapeze gets the ropes all wet.

While raising a child and working and exercising, I also learned what I needed to learn in order to make a decision about treatment. For a variety of reasons, I opted for a bilateral mastectomy with reconstructive surgery. I wouldn’t find out about chemo or radiation until after the surgery (spoiler: I was very very very very very very lucky – and didn’t need either). For my next number, I’ll go into my post-surgery life and what I learned about attempting a fitness routine with drains in (spoiler: yuck).

Please note that one thing I’ve learned is that breast cancer presents itself differently in all women. I don’t know if any two cases are ever the same. Please keep that in mind. I’m only qualified to write about my experience and as always, your mileage may vary.