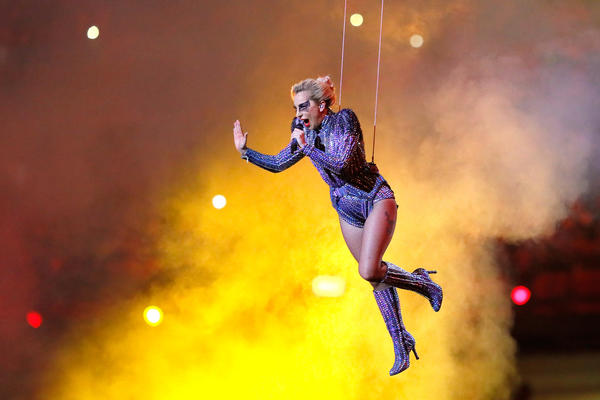 Now THIS is a performer!

I might be an athlete, but I’ve never been a football fan. I only watch the Super Bowl for the ads and, this year, for Lady Gaga’s half time show.

When Gaga first came on the music scene, I was skeptical. I figured she was just another auto tuned club kid. But that woman is the real thing: an artist who never compromises when it comes to her work and her entirely inclusive message. She is a true talent and an ally for humanity in general. I awaited her Super Bowl performance with bated breath.

And she didn’t disappoint. When she appeared atop the stadium and then took that leap off, my husband let out a guffaw of disbelief, followed by a “have you ever done that?”

The short answer is yes, I’ve worked in lines when practicing trapeze. The longer answer is hell no, I’ve never jumped off of anything in lines, or done flips in mid air, or sung a medley of songs while flying around. Lady Gaga slayed those aerial moves; that stuff is hard. Plus, I bet rigging it was hard. She was dependent upon her rigging crew to keep her safe and secure. My hat is off to them.

So, obviously, she gave one hell of a performance. Starting with “This Land is Your Land” was an inspired act of tasteful subversion. Hearing the LGTBQ anthem “Born This Way,” sung at the Super Bowl (and in front of homophobe Mike Pence) was fantastic. Lady Gaga managed to be pointedly political without any speeches or overt statements. She was a class act with a hard center of political action. I loved every minute of it.

Which is why, when I woke up the next morning, I was so disgusted to read stupid people (mostly men, but not all) complaining about Lady Gaga’s belly fat.

Are you kidding me? Really? This hardworking, song belting, high flying, genre bending, gender melding artist is getting flack because of a costume tailoring issue? A tiny bit of skin hung over her silver lame hot pants waistband, and that’s what people focus on? Our society isn’t just hard on women. It demolishes them for any visual “flaw.”

No wonder being female and aging in this society is so hard. When Lady Gaga gets crap piled upon her for, as one total ass put it, having a “pooch,” what chance do the rest of us have?

Now, I’m pretty sure Lady Gaga doesn’t give a fiddler’s fart about what these idiots have to say about her body. The woman morphs between meat dresses and ball gowns, pantsuits and harnesses. She’s making money and making art and making a difference. The people complaining about her belly are simply missing the point.

At my trapeze classes, a good number of us are over forty. We’re all in fighting shape, to be sure, but one of our group calls us, with a wink and a nod, The Muffin Top Circus. We accept our lumps, bumps, and overhangs. We do so partially because, after all, what choice do we really have, and partially because we’re on circus apparatus, for pete’s sake, doing amazing things. Sort of like Lady Gaga, although without all those hot dancers and that keyboard guitar thingie she played.

We will never perform at the Super Bowl. But when we watched her, we felt like she was performing just for us, muffin tops and all.