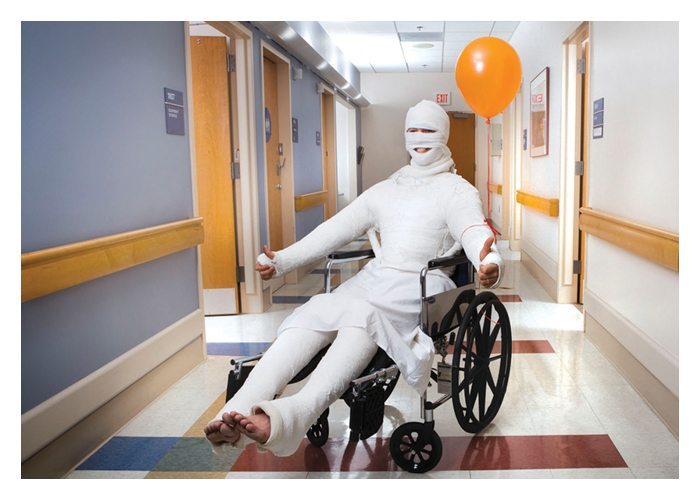 Luckily, this guy is an Ironman! He feels NOTHING.

As I’ve written here countless times before, I have a blown ACL in my left knee. Although I’ve lived with it for about six years now, it’s getting annoying by slipping out in unexpected places, like parking lots, or when I’m upside down and spinning on a single point trapeze. It might be time for surgery.

I asked my friend Bob, another over 40 circus athlete, about his surgeries. He’s had two ACL replacements (both knees) and a bicep reattachment. He knows all about the surgeries and the recovery times that accompany them. It’s really the recovery time I’m worried about, since the possibility of six months without circus could prove fatal to my mental health.

Bob told me I had nothing to worry about.

“You know, the first three days or so, they’re bad,” he said. “But you’re on drugs anyway. After that, it’s fine. You’ll be rehabbed and back in a couple of months.”

He was, as always, warm and reassuring, because that’s how Bob is: the nicest guy on Earth. He was also as sanguine about pain as every other circus arts junkie I’ve encountered. Is it possible that circus, which is uncomfortable at best and tear jerking at worst, has changed our perspectives on pain?

Think about it. In an average circus arts workout, you are likely to experience breathlessness, muscle cramps and burning, bruising, your skin ripping off various body parts (most often the palms of your hands and on your ankles), burns if you do fabric, a bonk on the head (not as common), foot cramps, and a possible muscle pull.

Let’s not even talk about what can happen to a guy’s junk.

So, a couple times a week, minimum, us circus folk go in and subject ourselves to pain, willingly, even cheerfully, and repeatedly. We often injure ourselves and then have to rehab and heal it. For years, I rested my lower back on a heating pad as a preventative measure and iced whatever body part protested too loudly. I have no qualms about popping Advil now and again, and I’m a fan of rolfing, which definitely falls into the no pain, no gain bodywork camp.

Obviously, we all take pain seriously. We take care of our bodies. However, we seem to differentiate between pain that will lead to some terrible injury and simply annoying trifles like bruises and bumps. We take our lumps in circus.

According to science, hardcore athletes like triathletes take their lumps when it comes to pain too. One German study, published in the scholarly journal Pain (insert your tasteless joke here. You know you want to), reviewed 15 different studies that involved experimentally induced pain in male and female athletes as opposed to healthy but non-athletic people. All the athletes showed a higher pain tolerance than the non-athletes: they felt the pain, but it bothered them far less. It’s hard to determine whether the athletic training increased pain tolerance, or hardcore sports naturally attracts people with a pre-existing high pain tolerance (correlation vs. causation), but the difference was real.

Another, newer, Australian study went further. It took non-athletes, measured their pain tolerance and thresholds, and then trained them moderately for six weeks. The results? Their pain tolerance increased by 20 percent. That’s a pretty big improvement.

I ascribe the increase in pain tolerance to the saying “familiarity breeds contempt.” When I’m up on the trapeze, upside down with my leg crocheted on the rope, and I get a foot cramp, I no longer register it as an emergency. The first time it happened, sure, I scampered down as quickly as possible to stomp it out on the floor. But after multiple times, I know I can ignore it safely; it’s an annoyance, not an emergency.

There might be a dark side, of course, to all this pain tolerance. For instance, professional athletes who play through the pain and end up with major injuries. Or the marathon runner who finishes the race no matter what the cost. Inevitably, when we train a routine for a show, we end up with injuries simply because we’re performing the same movements repeatedly, wearing out skin, ligaments, and muscles. My husband ran himself into a great case of plantar fascitis, which took lots of limping around and ignoring it until he gave in, went to the podiatrist and got the insoles, the brace, and did the exercises to rehab that injury. It’s possible to ignore the pain and end up much worse off, unable to play that sport or do that activity you love so much.

Which brings me back around to rehab. I mean, if I have to be injured and go through some crappy surgery to get better, I might as well have a whopping pain tolerance. I’m going to need it to regain the excellent flexion and strength I’ll need to get back to hanging on that trapeze. I’m going to need it when I’m flailing around on crutches in my house full of stairs, and in my tiny car. I’m going to need to stand that pain.