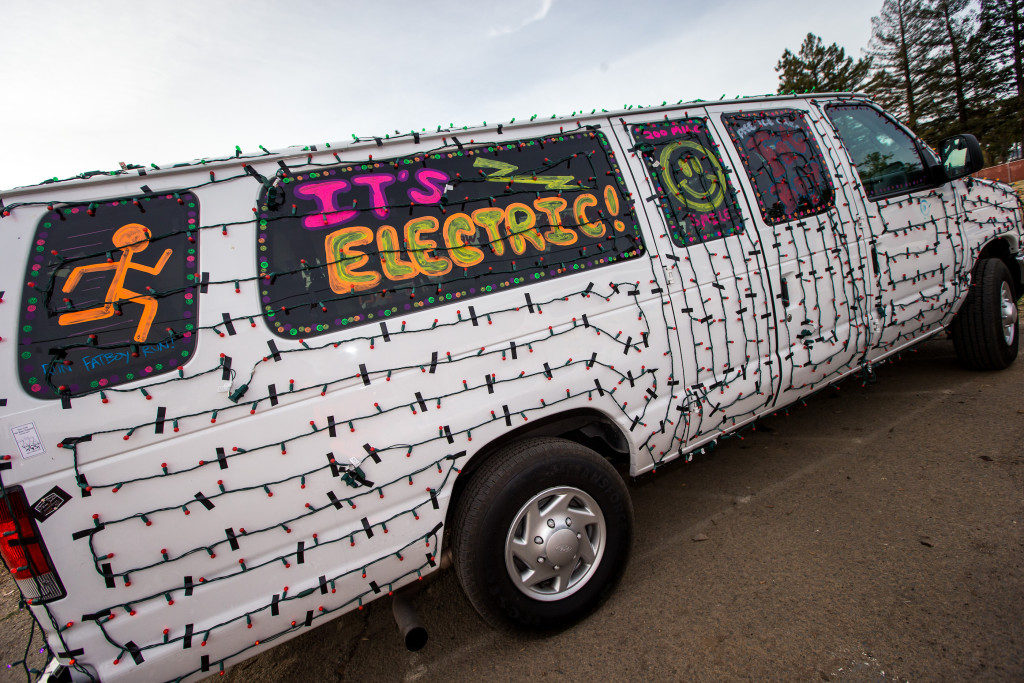 There’s nothing funny about the Ironman.

We have a place in Kona, where the Ironman begins and ends every year. It’s an explosion of the greatest, toughest athletes on earth, all descending upon what is essentially a cozy small town. They reward Kona with revenue and riches, and impact it in population and hubris. The Ironman is a grueling butt kicker of a triathlon, and there’s precious little humor to be found in it. We prefer to stay away from Kona during Ironman, arriving right after it’s over and basking in the quiet.

Well, sort of quiet. The Big Island has become quite the destination for extreme sports, mostly because it offers such an intense array of terrain and climates stuffed into a confined space. It’s ideal for marathons, triathlons, fishing competitions, and ultras. It doesn’t end with Ironman.

We were driving along the highway (there’s only one), headed up toward Kohala and famed Hapuna Beach, when we noticed many, many runners along the shoulder. Some were in amazing shape, some looked, well…less amazing, but certainly game. Some looked as thought they’d had quite enough. As we drove along, we began to see mini vans, many mini vans, with messages of good cheer. Some of these vans had the words Ragnar Relay stuck on them, which we assumed was the name of the event.

We passed yet another mini van. John blurted out the words, “Turd Alert.”

“No. That van said Turd Alert on the back of it.”

“I swear it. It said Turd Alert. What do you think that means?” he asked.

“Well, this is a running event, right? And runners get the runs, I’ve heard, so maybe that van was telling the runners Turd Alert to let them know bathrooms are ahead,” I said.

“That makes no sense,” he said.

“It makes as much sense as anything else,” I responded.

I’ve found that runners are a tad scatological. Many marathon and ultra running horror stories end with an emergency poop incident, usually not involving t.p. or adequate cover. A triathlete acquaintance once told me that she would just pee on her bike seat during an event (which, if you think about it, saves a ton of time, although might be a bit hard on the seat itself). Still, scatology alone seemed not enough to justify a random Turd Alert.

Later in the evening, after our beach day, and after watching tons of runners slog into Hapuna Beach (obviously the finish line), I looked up the Ragnar Relay. It’s what’s called an ultra relay, done in either teams of 12 or 6 people, running 200 miles over a 48 hour period from one side of the Big Island to the other. The runners trade off shifts, and every member gets at least one shift late at night. It sounded brutal, but probably not as brutal as running an entire ultra yourself (like contributor and runner Sarah Lavender Smith does).

Still, Turd Alert. What the hell? Finally, three days later, on my husband’s birthday, I looked up the Ragnar Relay race results.

“Happy Birthday to you,” I said to John. “You want to know who came in 13th in the Ragnar Relay? None other than Turd Alert. It’s a team name.”

“Not only that, it gets better. Want to know the team’s full name? It’s Turd Alert: Slay Poopon,” I told him.

I think we laughed uncontrollably for about five minutes, because we have the collective maturity of a 12-year-old boy.

Luckily for us, it turns out that running teams share our sophomoric humor. On the Cascade Relays web site, I found a list of the best running team names ever. While Turd Alert wasn’t there, O Van, Where Art Thou?, The Bea Arthurs, The Fats and the Furious, Cirque de Sore Legs, and Kiss My Assfault made the list. It was satisfying to know that, if we ever decide to participate in such an event, we will be among our people.

Just out of interest, John looked up the rankings for last Ragnar Relay, held in Redondo Beach. Turd Alert was present and accounted for, but that time called itself Turd Alert: Ultra Sh*tty.