Feel The Afterburn: HIIT and Tabata 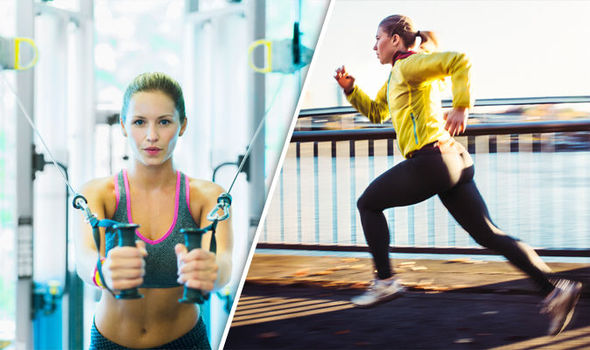 These women aren’t sweaty enough to be doing HIIT, but you get the idea.

Recently, I started taking spin classes that incorporate HIIT and Tabata methods. It’s been fun to have the extra challenge, plus, once over 40, anything new equals some sort of result. And we like results, right?

The premise behind HIIT (high intensity interval training) and Tabata (a particular type of HIIT workout), is that the technique of very quick, extremely intense bursts of exercise followed by short recovery periods yields more calorie and fat burn. High intensity workouts increase your need for oxygen during the burst, creating an oxygen shortage, which then makes your body demand even more oxygen on the recovery period. This brutal pattern is repeated until the instructor has mercy or you throw up, which ever comes first (just kidding. I haven’t thrown up since a long ago Barry’s Bootcamp class. Throwing up is not desirable. Do not train to the vomit point).

Apparently, HIIT also results in excess post-exercise oxygen consumption (EPOC), which leads to an afterburn effect: more calories burned both during and after the workout. This so called metabolism boost can last up to 48 hours after, which means that, if I had done a HIIT session today, the Cruffin I just consumed wouldn’t be so ruinous.

HIIT workouts can be done with weights, doing basic floor exercises, or doing any sort of cardio. For instance, in a spin class incorporating HIIT, you might do a 60 second all out sprint, followed by a 30 second jog, and then repeat three times.

Tabata is a subgroup of HIIT, a sort of HIIT on steroids. Invented by Japanese scientist Dr. Izumi Tabata, Tabata training is the original 4 minute workout. A typical Tabata session on a spin bike looks like this: spin as hard as you can (with some resistance, either in or out of the saddle) for 20 seconds, followed by a 10 second rest. Do eight rounds. If you’re doing weight training or floor exercises, do a 4 minute session for each exercise. This will add up fast.

A Tabata spin session is sort of terrible. On the plus side, it’s sort of what I term fascist fitness. It’s so relentless, quick, and unyielding that you have no time to contemplate your misery. Rest time is only enough to just catch your breath. Sprint time is not quite long enough for the aforementioned vomitus. Repeating it for eight times is like being stuck in a washing machine on the spin cycle: keep moving with the motion or die.

While much of the prevailing exercise wisdom, especially in the heart healthy realm, has been on slow and steady, maintaining target heart rate for maximum fat burn, HIIT preaches the opposite. The whole idea is to work so hard that you shock your system into overdrive, almost like it’s in a panic. And then there’s that afterburn, which is supposed to burn even more calories for hours beyond the workout

Here’s the thing about those claims: there is no free lunch (or free Cruffins). I will always maintain that it’s calories in, calories out. So, even if you very efficiently burn a bunch of calories doing a HIIT workout and get that afterburn, if you go out and eat a whole pizza and swill two pitchers of beer, you’re still screwed. There’s no way you’re burning that off, unless your afterburn is blasting you to the moon. You still have to use common sense.

Still, there’s plenty to love about this type of training. It’s faster, more efficient, and SO MUCH LESS BORING! On top of that, it’s apparently great for your heart, which is excellent news for women in their 40’s and beyond.

You can definitely find a personal trainer who can design a HIIT or Tabata training routine for you. If you’re interested in spinning with HIIT or Tabata, Hype Silver Lake has a few instructors who do it: Tara, Kate, and Sheila.